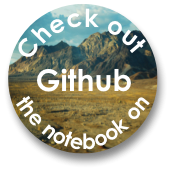 This content is part of a series following the chapter 3 on probability from the Deep Learning Book by Goodfellow, I., Bengio, Y., and Courville, A. (2016). It aims to provide intuitions/drawings/python code on mathematical theories and is constructed as my understanding of these concepts.

We have studied the basics of probability in the last post/notebook about chapters 3.1 to 3.3 of the Deep Learning Book. We have learned what is a random variable, a probability mass function or a probability density function. The goal was also to gain more intuition for very used tools like derivatives, the area under the curve and integrals.

We’ll insist on the mathematical notation employed in probability. You’ll see that this is an expressive and synthetic way of expressing ideas!

Let’s start with some details about the notation. As usual, it is important to ensure that every single piece of mathematical notation is crystal clear. The following figure summarises the notation we’ll use in this article 🔧: 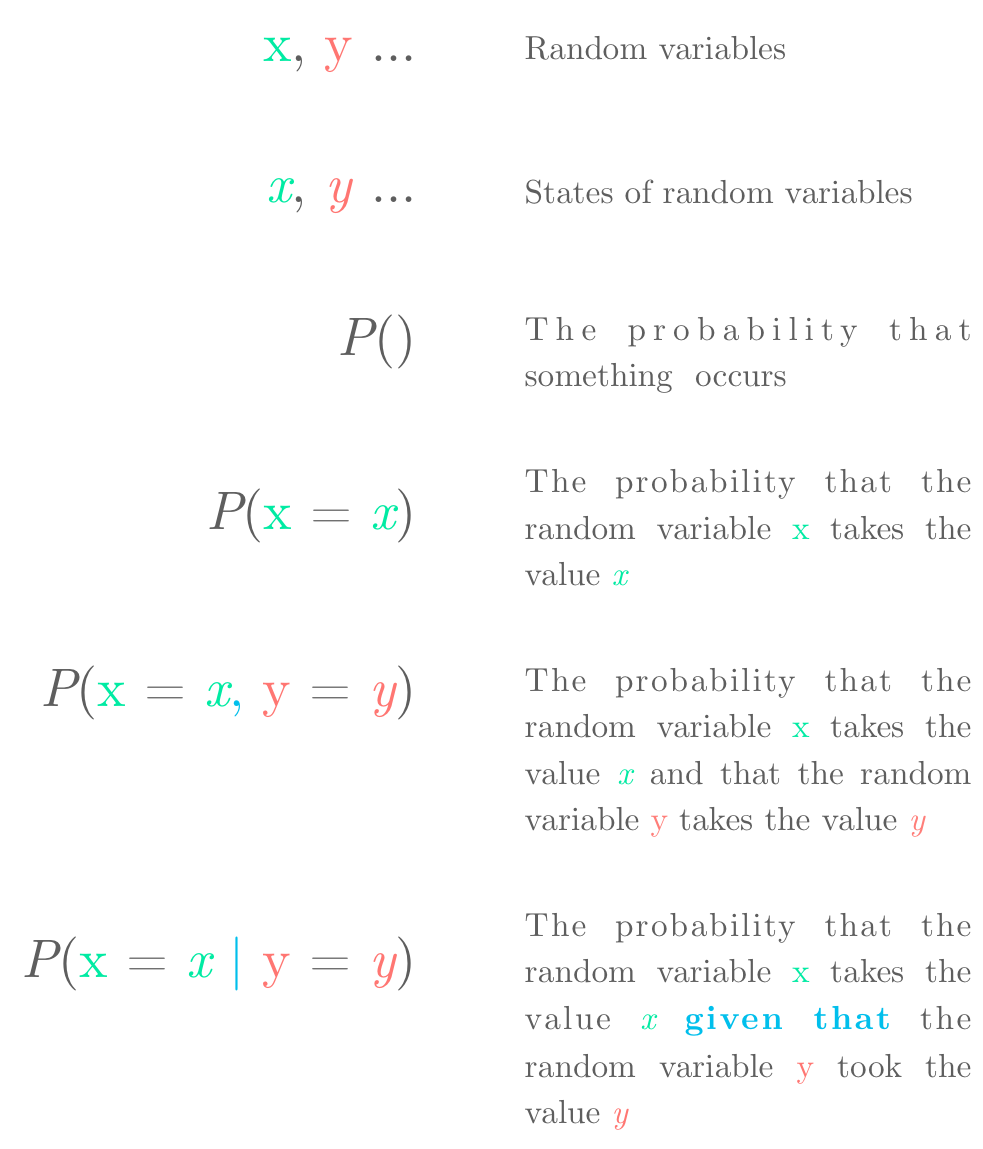 Dictionary of mathematical expressions and their corresponding English traductions.

As we have seen in the last post, $P(\text{x}=x, \text{y}=y)$ refers to the joint probability that $\text{x}$ takes the specific value $x$ and that $\text{y}$ takes the specific value $y$. For details on the notation, you can also refer to the previous article. You may also encounter the intersection notation: $\cap$. For instance $P(\text{x} \cap \text{y})$ corresponds to the probability that both $\text{x}$ and $\text{y}$ occur.

Let’s start with an example to tackle the notion of marginal probability.

The probabilities of two events (tossing a coin and throwing a dice) are represented individually.

You can be surprised that I displayed the probabilities in a table. Actually, I took the problem backward: these probabilities are the marginal probabilities. The name ‘marginal’ reminds the idea that we can write them in the margins of the table.

The question is: what are the other probabilities we could write in the middle of the table? They are the joint probabilities. It is the probability to get two specific outcomes:

We can see for instance that the probability to get a 1 and a ‘head’ is equal to $\frac{1}{6} \times \frac{1}{2} = \frac{1}{12}$. The marginal probabilities are represented on the margins and correspond to the probability distribution of a subset of the variables.

Expressing this mathematically, we have:

We’ll go into the details of this equation.

First, remind that the typeface is important and indicate different things. $\text{x}$ is a discrete random variable (for instance, corresponding to throwing a dice) and $x$ is the outcome of the random event (for instance, one of the possible dice outcomes: 1, 2, 3, 4, 5, or 6). Identically, $\text{y}$ is random variable (let’s say corresponding to a coin toss) and $y$ is the outcome of $\text{y}$ (‘heads’ or ‘tails’).

So now we can look at what is said by this equations: 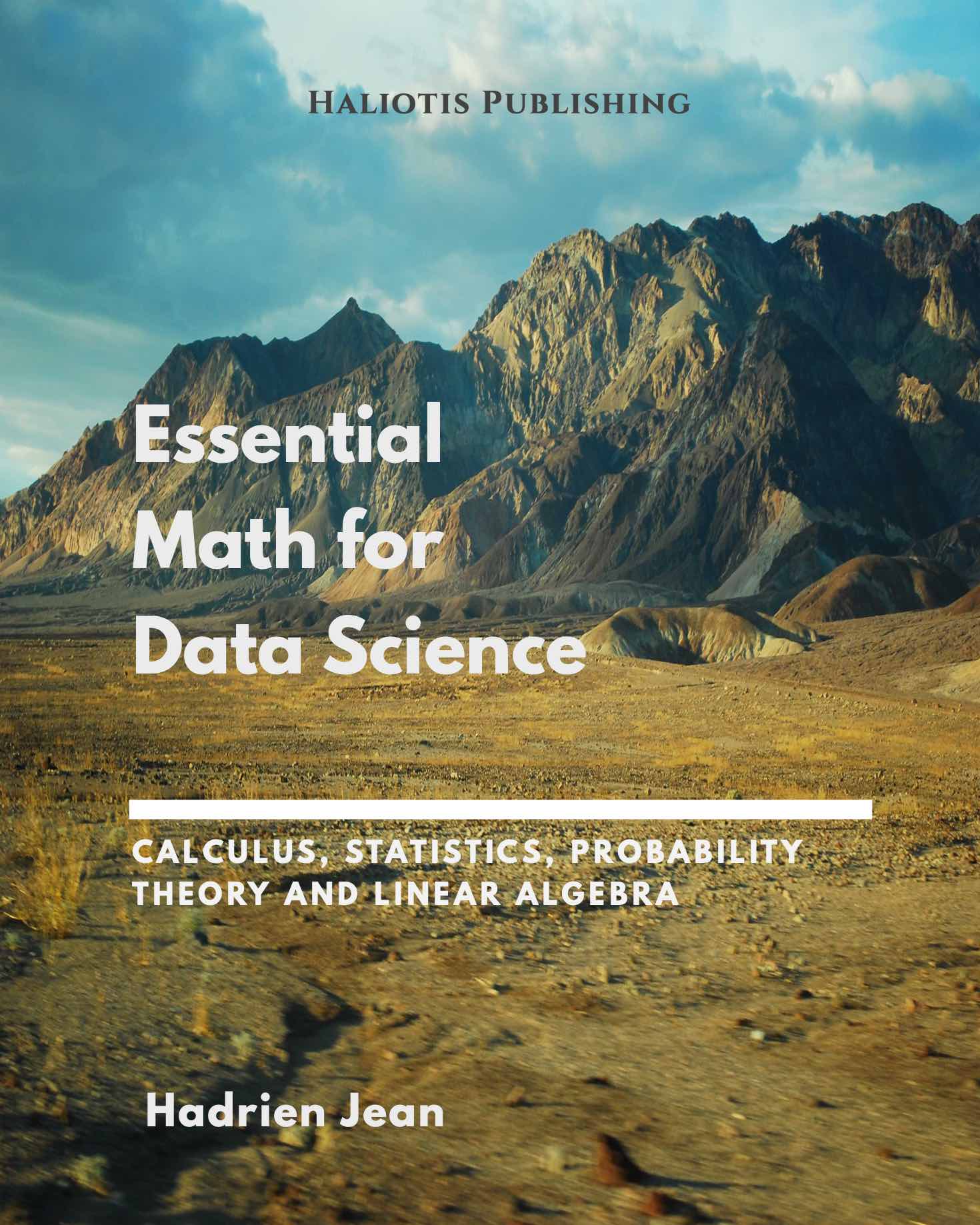 As in the last example, we’ll do an experiment where we throw a dice and toss a coin. The center of the table above gives us the probabilities that both $\text{x}$ and $\text{y}$ take a specific value, that is to say, that we get specific outcomes for the throw and for the toss. For instance, the probability to roll a 1 and to toss a ‘head’ is $P(\text{x}=1, \text{y}=’heads’)= \frac{1}{12}$.

Joint probability to toss a head and to throw a 1.

We can use the previous equation:

So let’s say that we want to calculate the probability to roll a 1:

Does that make sense? Since every case of $\text{y}$ have been taken into account, this is just the probability of rolling a 1. This is called a marginal probability.

I hope that the notation is clear now. No worries if you don’t already master these mathematical symbols: this is really just a matter of habits 💪🏼. You’ll see that it is a useful and synthetic way of thinking.

If we take the mean of all values in this vector, we’ll get a value near 0:

We would get a mean nearer than 0 with more values in the vector.

The standard deviation tells if the individual values are more or less spread away from the mean. 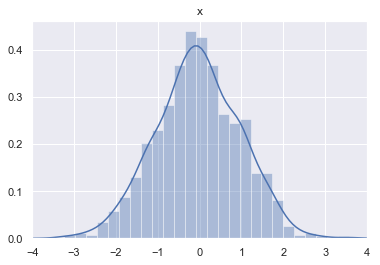 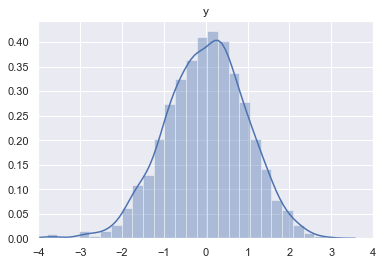 Let’s try to understand what is really represented on these plots. I used the function distplot from the package seaborn. The y-axis gives the probability density that the variable takes the value given by the x-axis. You can find more details on probability density functions in the last post/notebook. In short, the area under the curve has to be calculated for a certain range of the x axis to get the probability to get a value into that range.

For discrete variables $\text{x}$ and $\text{y}$, we have seen that marginal probability $P(\text{x})$ is the sum of the probabilities for each value of $\text{y}$. Now that our variables are continuous, we have to use integrals but the principle is the same: 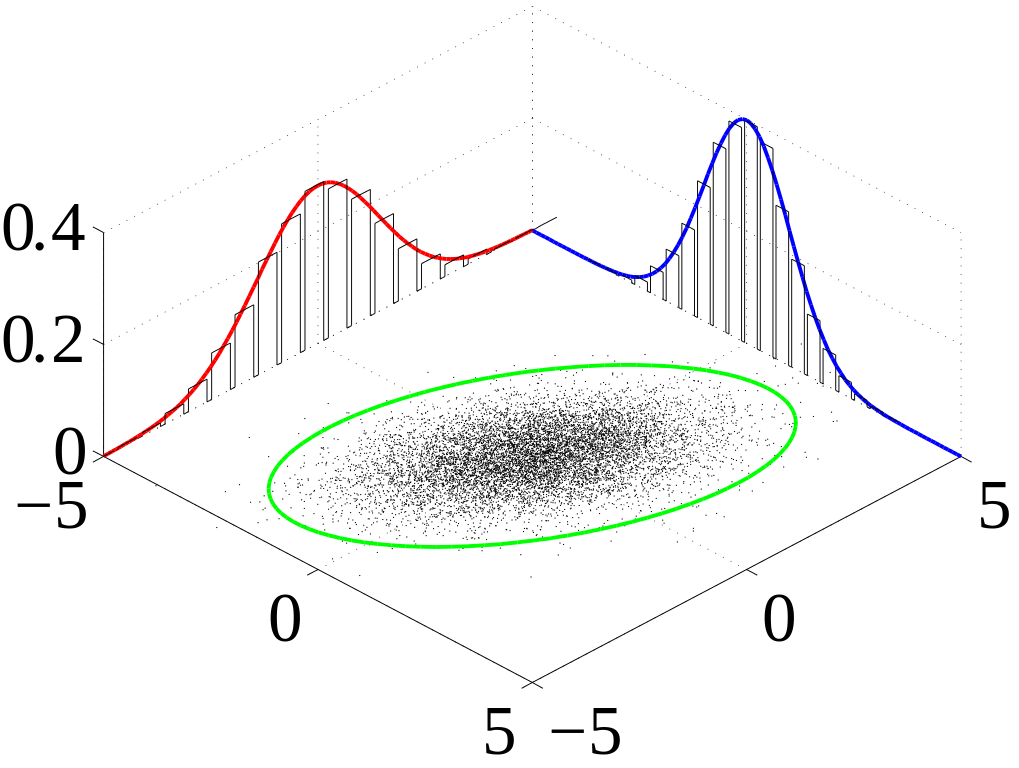 This can be expressed with the following equation:

For more explanations about integration, you can check out this post/notebook. The variable following the small $d$ at the end of the equation tells the variable used for the integration. So in the first equation, we integrate over $\text{y}$. This means that we consider $\text{x}$ as a constant. We do the opposite in the second equation.

Conditional probability refers to the probability of an event given that another event occurred.

First, it is important to distinguish between dependent and independent events! The intuition is a bit different in both cases.

A question we can ask is: what is the probability to get a 3 from the dice throw and a ‘head’ from the coin toss?

We can see that the two events are independent because we don’t expect any effect of one on the other.

Example of dependent events: two cards from a deck

In this example, we’ll get two cards in a deck without replacement. The probabilities are different when we take the first card (all 52 cards are in the deck) and when we take the second card (there is now 51 cards, one missing). This means that the events are dependent: the result from the first draw will impact the probabilities of the second draw.

A question we can ask is: what is the probability to draw a 6 on the second draw when we got a 6 on the first draw?

Mathematically, there is a convenient relationship between conditional probabilities and joint probability:

Let’s be verbose and convert the equation in plain English:

It may be more intuitive to look at it in another direction: 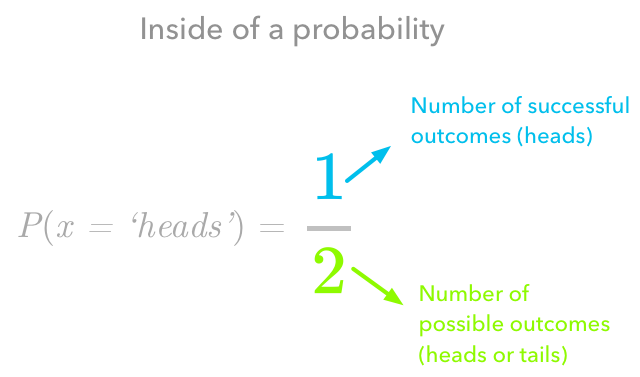 Now if we consider the two events, here are all the possibles outcomes:

To be sure that conditional probability is crystal clear, we’ll take an example for independent and dependent events. Besides, more details on the concept of independence are explained in 3.7.

We’ll start with the case of independent events.

In our example, we have:

And we’ll finish this article with an example with dependent events.

We have seen that the general formula to calculate conditional probability is:

The conditional probability we want to calculate is thus:

This means that we have almost 6% chances to draw a 6 once we already got a 6. We can note that it corresponds to $\frac{3}{51}$ (more details in the next chapter).

We also talked about conditional probability. It corresponds to probability under certain conditions, for instance, the probability to get a six in a deck of cards knowing that we already got a six and didn’t replace it. We investigated the cases of dependent and independent events.

I hope that this article helped you to use and read the mathematical notation underlying these concepts.